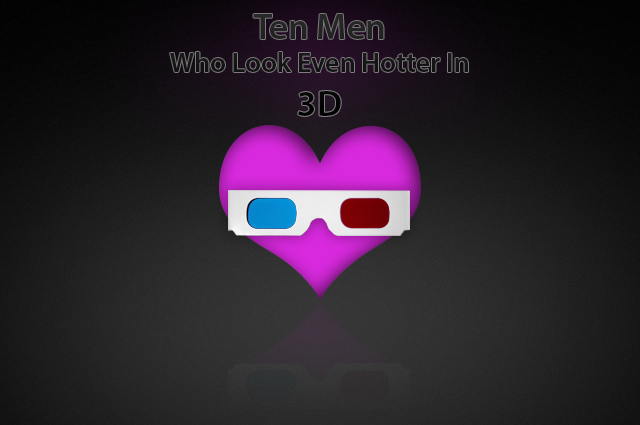 We are officially half way through our 3D Week here at Flecking Records – isn’t it about time someone lowered the tone?

We’re huge fans of 3D, but you know what we’re even bigger fans of? Boys! So the fact that we can have 3D boys in our living rooms, popping out of our TV screens… it’s too much for our little brains to handle.

That said, we’ve been having a long hard think about which 3D male celebrities we’ve enjoyed ogling the most.

It’s a love affair that probably started back in 2003 when I saw Antonio Banderas in Spy Kids 3D through cheap paper glasses (you didn’t make the list though, lo siento Antonio), but now it’s way easier to appreciate 3D fellas after a boom in 3D movies. It was a novelty to see a flick in 3D back then (when I was, rather embarrassingly, 16-years-old) but these days every other film you watch has an optional additional dimension.

So whether we’re perving over the boys in Jackass 3D, Jensen Ackles in My Bloody Valentine or checking out the lovely Leonardo DiCaprio in the recently released Titanic conversion, we’re not short of 3D fitties. We’ve included 3D clips where possible, so sit back, grab your 3D glasses (Polarised, Active shutter, Red & Cyan, Green & Magenta or Blue & Yellow – or you can always go cross-eyed and embrace the inevitable headache) and enjoy the hot boys.

Warning: We’ll state clearly which film each fella is from at the top of each page. Huge plot spoilers will feature, so if you haven’t seen the film then give it a miss and read the next one.